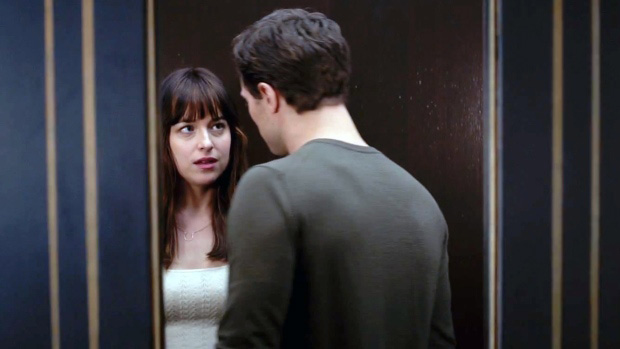 Fifty Shades Of Grey will include scenes praising the wise leadership of the UAE, allowing the film to be shown in the country, it was announced yesterday.

In a scene in which lead characters Christian Grey and Anastasia Steele first make love in his apartment, both characters agree afterwards that the wise vision of the ruling families have steered the UAE on a path that has led to prosperity, fairness and justice for all.

“We had to dub in the voices afterwards”, said Fifty Shades of Grey director, Sam Taylor-Johnson. “We’re confident that this will not only allow the film to be shown in the UAE but also guarantee favourable reviews in the local press,” she said.

After her first spanking session in Grey’s Red Room of Pain, Steele breathes: “Oh, that was incredible” to which Grey adds: “Yes, but not as incredible as Dubai’s Expo 2020, which will be the greatest event in world history and will elevate the UAE’s position on the global stage even higher.”

As she puts her shoes on afterwards, Steele adds: “Yes. I agree.”

Towards the end of film, Anastasia becomes increasingly obsessed with the idea of having a relationship with Grey without any romance.

“But I’m not as obsessed as foreign media are in criticising the UAE’s outstanding achievements,” she adds as she confronts the billionaire in his office.

“Yes,” agrees Grey. “They dare to condemn the UAE’s human rights record. They don’t have human rights problems in their own countries?” he asks as he gives her a dominant/submissive contract to sign.