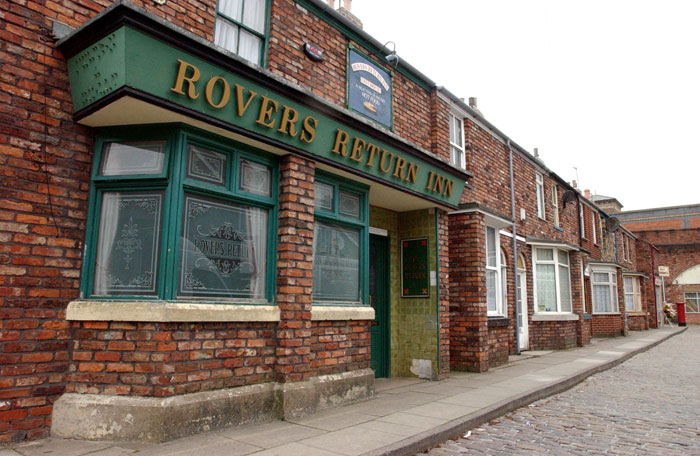 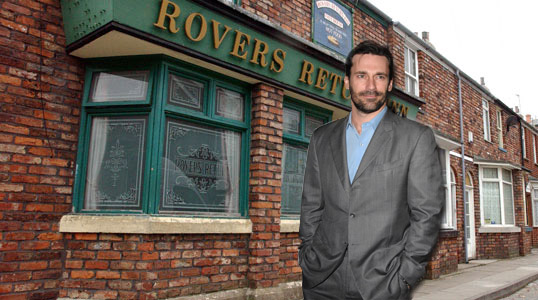 US TV star Jon Hamm poses for cameras after joining Coronation Street for a rumoured $35 million. He is expected to debut in this weekend's episode

While the financial aspects of the deal were not disclosed, representatives from Abu Dhabi unveiled a five-year strategy of investment and expected growth for the TV series, including new characters and developments across the whole of Weatherfield. Many experts are now suggesting Coronation Street could be poised to snatch the coveted Best British Soap award at the annual British Soap Awards, which has been won by arch-rivals Eastenders for the past five years running.

“This is great news for Corrie,” said UK TV pundit Roger Mellie. “With this sudden influx of oil wealth it could well be set to become the dominant force in British soaps for the foreseeable.” 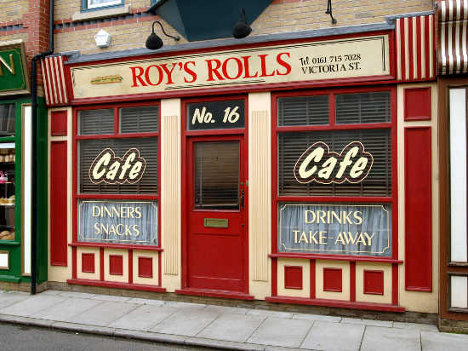 Insiders suggest Roy's Rolls cafe will be transformed into a shisha bar, while Elliott & Son butchers will become 100% halal

The announcement in Manchester was immediately followed by the unveiling of Coronation Street’s first big name purchase made with the new investment.

Jon Hamm, bought for a rumoured $35 million from Mad Men in the US, is set to join the cast for this weekend’s double bill, following the successful passing of a medical tomorrow. Hamm – who will play a “new barman at the Rover’s Return” – is thought to have been enticed over the Atlantic with a deal of around $250,000 per episode.

“The arrival of Hamm underlines exactly where we want to take Coronation Street,” said managing director Curly Watts. “We expect him to become one of the show’s major characters.”

But the Mad Men star is unlikely to be last multi-million dollar international signing, and many Coronation Street fans are already drawing up their dream list of residents.

Among the bookies’ favourites to move to Weatherfield are Charlie Sheen (considered the ‘Mario Balotelli of the TV world’), Hugh Lawrie, Sofie Gråbøl (better known as Sarah Lund from Danish crime series The Killing) and the Kardashian family, who are expected to play themselves. With an eye to attracting the lucrative Middle East audience, Turkish stars Songül Öden and Kivanç Tatlitug have also appeared on many lists.

“These are all world class TV names that could cost well over $100 million to buy, on top of their hugely inflated salaries, but should really help propel Coronation Street into the international big league of TV soaps,” said Mellie.

As something of a spit in the face to their rivals, there are also rumours that Coronation Street execs have been tapping the services of former Eastenders’ hellraiser Leslie ‘Dirty Den’ Grantham for a role of TV villain, something Mellie described as “a rather audacious act”.

Cast aside, fresh investment on the street is expected to see some marked changes over the next year. According to insiders, the new owners have drawn up plans to transform the Kabin newsagent into a roadside shawarma stall, renovate Roy Cropper’s Roy’s Rolls café into “some sort of shisha bar” and replace the Underworld knicker factory with a “futuristic mall with 900,000 square feet of shops”. Elliott & Son butchers is expected to become 100% halal within the next week. 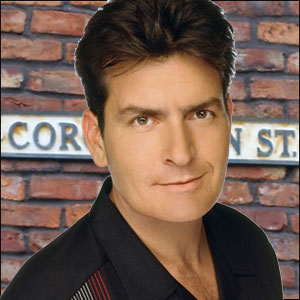 Charlie Sheen is rumoured to become the next big money signing, although many are worried about his erratic off-screen behaviour

Plotline stipulations are also believed to have been put in place that will see Coronation Street’s characters make “regular trips to Abu Dhabi, either for business or pleasure”. Some of these UAE-based storylines will be filmed for “one-off specials or bumper holiday episodes”. One suggested story already said to be in the pipeline with scriptwriters will see “Tyrone Dobbs and Steve McDonald win a trip with Etihad to stay at the Emirates Palace”.

Despite the excitement from Weatherfield, some experts have criticised the deal, claiming that the millions being poured into Coronation Street from abroad will “ruin” TV soaps and send prices skywards.

“Eastenders is going to have spend through the roof if it wants to keep up with Corrie,” said Harold Bishop, editor of TV Kwik magazine. “But with Abu Dhabi’s millions distorting the market, prices and wages are going to be double what they were.”

Bishop added that many of Eastenders directors were bigger concerned its bigger names would start looking for substantially improved contracts in the coming weeks.

“Manchester used to be the destination for Walford’s finest whenever they were forced to leave the show. Now it looks likely to be the place they all want to go for a better salary,” he said.

But Bishop admitted that the move was a “clever deal” for Abu Dhabi.

“In Coronation Street, they’ve got a soap with great heritage, with a dedicated legion of supporters who have stuck loyally by through some turbulent years that have seen it fall behind not just to Eastenders, but to the likes of Hollyoaks, Emmerdale and even Waterloo Road. By pumping money into the right areas, they can help turn Weatherfield around, bring home the Best British Soap award and, in doing so, cement the Abu Dhabi name into UK TV history.”