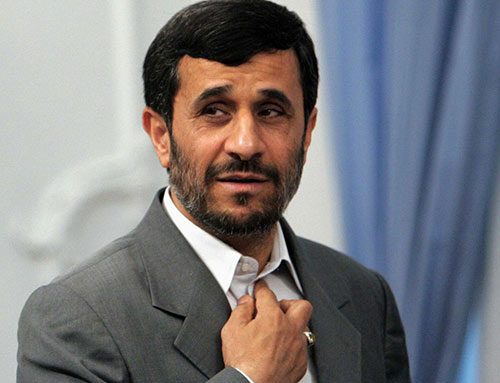 Due for release next month, Mahmoud Ahmadinejad’s autobiography is set to “blow the lid off” some of the region’s biggest secrets, according to publishers Random House

TEHRAN: Next month will see fans of Mahmoud Ahmadinejad queuing round the block, as the Iranian premier releases his much-awaited autobiography. Mahmoud Ahmadinjead: My Story will be a “tell-all account of the life, loves, and nuclear capabilities of a guy who we all know as – Mahmoud,” claimed publishers Random House in a statement.

The Iranian president, who is due to step down after two terms in power following the elections on June 14, is rumoured to have been paid a “six-figure sum” for the publishing deal. But the money appears to have been well spent, with reports the pint-sized premier has “sensationally opened up for the first time about Iran’s nuclear ambitions”, revealing exclusively whether the continued expansion of uranium enrichment capabilities is for domestic use or for the development of nuclear weapons.

“Whether he’s holding audiences spellbound with his forthright views on homosexuality, or announcing his desire to become Iran’s first astronaut, one thing’s for sure: no celebrity has captured the public’s imagination quite like Mahmoud,” added Random House. “But behind the glossy black hair and casual fawn jackets, lurks a mystery: has he been really building a big missile to fire at Iran’s foes?”

In an extract from My Story published exclusively by The Pan-Arabia Enquirer, Ahmadinejad describes the first time he stepped inside the Bushehr Nuclear Power Plant in 2011.

“As I stood before the glowing reactor, I could barely contain myself. “Mahmoud,” I thought, “You’re living your boyhood dream!”

In another shocking passage, Ahmadinejad details an encounter with Israeli president Benjamin Netanyahu in the United Nations bathrooms.

“It’s no secret that me and Bibi have had our issues in the past, but when I heard him crying in a toilet cubicle because the UN General Assembly had said he couldn’t bulldoze Ramallah I thought he needed cheering up. We had a hug and he thanked me, but two weeks later he was off saying Iran should be attacked! What I didn’t tell him was that his flies were still undone when he left the bathroom.”

At Barnes and Noble, Washington, US defence secretary Chuck Hagel has already starting camping out to ensure he’s first in line for a copy.

“The contents of this book could seriously influence our future view of the perceived Iranian nuclear threat,” he said from his sleeping bag on the pavement. “Also, I want to know what really happened when Mahmoud was trapped in a lift with Barbra Streisand at the UN Christmas gala dinner.”

Other chapters in the book will reportedly touch on Ahmadinejad’s iconic wardrobe, his time as mayor of Tehran when he was forced to oversee the city’s first Mardi Gras and his “difficult” relationship with his mother Susan.

“Mahmoud Ahmadinejad: My Story has got something for every reader, a rags to riches tale that goes from humble beginnings to nuclear enrichment programmes,” added Random House. “We’re confident it’ll be the smash hit of the summer, a perfect holiday companion for the pool side or the beach.”