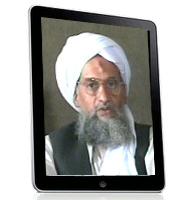 SOMEWHERE IN YEMEN: International terror organisation al-Qaeda yesterday launched its first official iPad application, another tool with which the group hopes to unite the world in hatred of western imperialism.

al-QaedApp, which went live last night, gives users instant access to the works of some of the most radical clerics in operation, with podcasts and live video streaming, along with quizzes and competitions.

“al-QaedApp is our latest and greatest marketing product to take out to a global audience. Death to the West,” spokesman Mark Sudbury told The Pan-Arabia Enquirer via video link-up from a secret location in Yemen yesterday.

Sudbury said that al-Qaeda’s international operatives will be using the new application to interact and engage with their fans. “But don’t go asking them where they are, because we’ve told them not to tell anyone,” he quipped.

Among the options now available free to users of the application are live video feeds from training camps and downloadable instruction manuals.

“Because of their busy schedules, many of our followers don’t have the time to attend the official al-Qaeda facilities in Pakistan and Yemen. This way they can learn from our team of expert trainers, but in their own time,” said Sudbury, adding that there were plans to add a recipes section in the next few weeks.