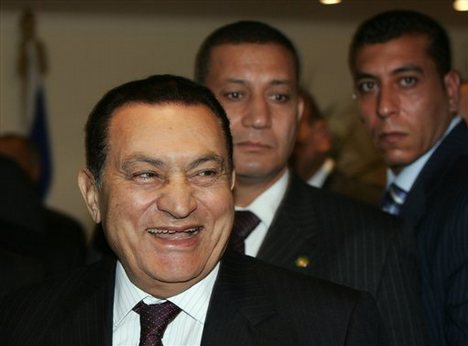 Leaders from across the Arab world made a joint announcement on Friday, declaring that the uprisings that have shaken the region since the start of the year were nothing more than an elaborate April Fool’s joke.

Speaking from a press conference in Cairo, Hosni Mubarak, thought to have been ousted from power after weeks of violent protest in the Egyptian capital, made the shocking revelation after emerging from the cellar of his presidential palace.

“You should have seen the faces of the world leaders, it was priceless,” he laughed. “Just to get Israel sweating beneath the collar about the prospect of the Muslim Brotherhood taking power was worth it.”

According to Mubarak, the hoax was hatched by himself and Tunisia’s Zine El Abidine Ben Ali one evening after a several beers. “We were just a bit bored, the TV was rubbish and we thought it’d be fun to play some sort of a joke on those ‘oh look at me aren’t I great’ West democracies. It started with the idea of putting a Whoopi Cushion on Obama’s chair next time or fake poo in Sarkozy’s presidential suite next time either of them came over for a state visit and kind of spiralled from there.”

Ben Ali, who was also at the announcement, said that he’d spent the past two months on holiday in Mallorca. “Can you honestly see me stepping down from having absolute control of an entire country and fleeing to Jeddah?” he chortled. “Seriously, have you been there? It’s rubbish.”

As the joke went on and Western leaders were successfully duped into believing that the political framework of the whole region was about to come crashing down, other countries soon came onboard. “Bahrain and Yemen were both up for a bit of a giggle too,” said Mubarak, who also confirmed that he was still overseeing dictatorial control of Egypt. “We all used to get together each evening to watch CNN and snigger while Clinton, Cameron and co all bickered over potential outcomes for the region. It was brilliant.”

However, Mubarak said that some people had taken the joke a bit too far. “We’ve tried to tell Gaddafi countless times that it was only a bit of fun, but we’re afraid he’s taking the whole thing a little too seriously.”