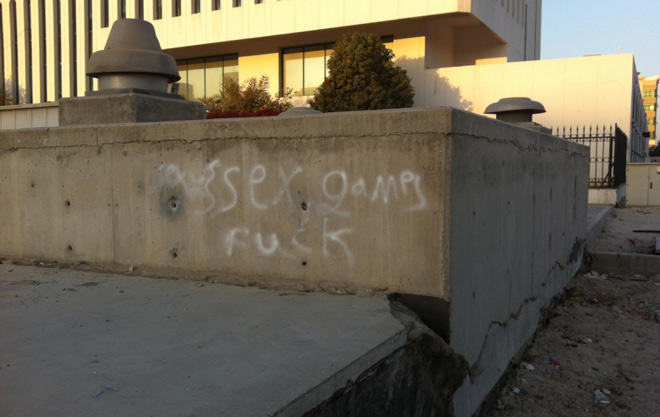 ABU DHABI: A wall in central Abu Dhabi has become an overnight sensation after a new mural was linked to UK guerilla artist Banksy. The image, which was first spotted yesterday afternoon, appears to show the words ‘Sex’, ‘Games’ and ‘Fuck’, and while Banksy has not yet claimed the work, experts claim it bears all his hallmarks.

“In the same highly-politicised style of much of Banksy’s pieces over the years, it’s a very brutal statement regarding society,” said the Street Art News website. “The crude nature in which he’s scrawled these thought-provoking words provides an exceptionally powerful narrative.”

If the artwork does turn out to be Banksy, this won’t be the first time he will have brought his spray cans to the region. Last year, a mural appeared on the West Bank separation wall that said ‘Israle r shit, lov Reall Madrid’ which was eventually confirmed by the artist.