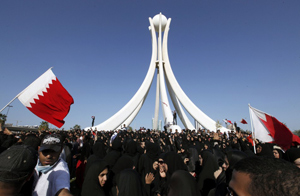 With angry public dissent making headlines across the likes of Bahrain and Tunisia, and Egypt’s ongoing street protests showing no signs of dissipating, some of the world’s biggest brand names have been capitalising on the publicity given to various outdoor venues in cities affected.

In a deal signed yesterday, Manama’s Pearl Roundabout, where the pro-democracy uprising was crushed two years ago and recently the focus of renewed street protests, will be renamed eBay Roundabout for the next six months. While financial terms were not revealed, experts believe the deal to be worth in excess of $50 million.

“To be honest, it’s small change if you consider the international publicity eBay will be getting should another huge uprising erupts that ends up dominated news headlines across the world,” said Eric L. Howitzer, chief analyst for the GCC Marketing Advisors Group.

Many look to the experience of supermarket chain Lulu, which saw a dramatic leap in brand value following a deal with Pearl Roundabout that was arranged before the Arab Spring kicked off and thought to have cost a fraction of the price paid by eBay.

“Lulu was on the front pages of newspapers for months, you really can’t buy that sort of publicity,” said Howitzer.

Elsewhere, companies including Starbucks, Intel and DHL have reportedly been sniffing out opportunities in Egypt’s Port Said, with nothing yet confirmed.

“The prize asset is obviously Tahrir,” admits Howitzer. “Back in 2010 you could have snapped up naming rights for just a few million and been laughing all the way to the bank. I heard that Coca-Cola offered $400 million in December but were turned down.”