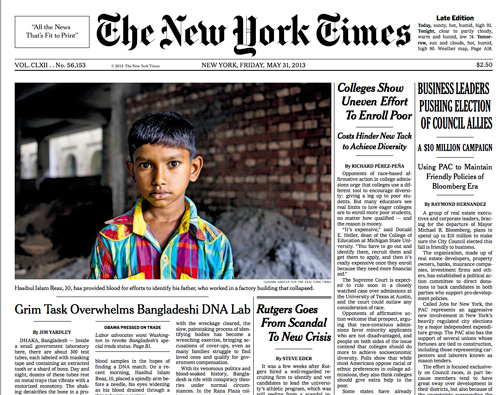 DUBAI: The New York Times is to convert to a colouring book after it was refused printing rights in the UAE this week.

“To stay competitive in a tight media market, we’ve decided that our Gulf edition will mostly feature blank pictures of flowers, houses and horses that our executive business readers can colour in at their leisure,” said New York Times publisher Arthur Sulzberger Jr.

“It won’t affect our high standards – the New York Times branded colouring crayons will be of top quality and the pictures will have lots of lines, so plenty of room for different colours,” he vowed.

Sulzberger was speaking after the UAE government-funded Khaleej Times refused to print the New York Times Gulf Edition because of a front page article about worker rights in Abu Dhabi.

“We promise our readers it won’t be all drawings in our Pulitzer Prize winning publication,” said Sulzberger.

“There will also be a daily competition called “Can You Help Tommy Find His Way Home?” in which you use a pencil to find a way from the boy to the house at the centre of a maze. It will be a different maze every day!” he said.

“This is an excellent solution,” said Khaleej Times spokesman, Ahmed Al Sultan. “But the maze is too hard. It took me 20 minutes to do it yesterday. What kind of boy takes such a complicated way home? UAE roads are much straighter than that. This if the reality,” he said.