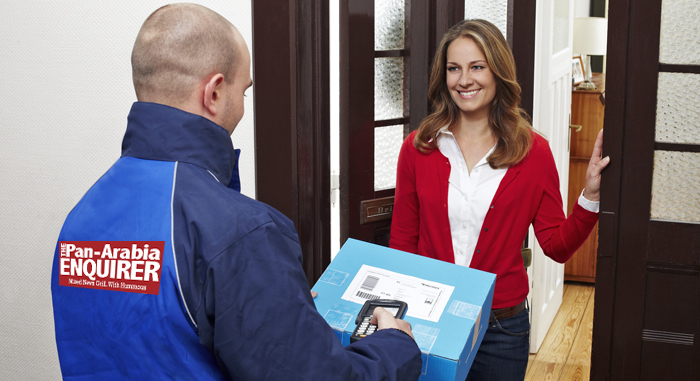 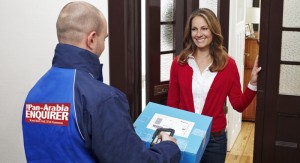 DUBAI: A city was brought to a standstill this afternoon when a man delivered an item that had actually been ordered, in perfectly usable condition, to the home of someone who had actually ordered it.

The shocked buyer, who lives in the Dubai Marina area but did not wish to be named for fear of reprisals, told The Pan-Arabia Enquirer: “Obviously I was pleased, I mean I’ve always wanted a faux Ottoman living room chest with authentic drapes and built-in massage facility and chiller, but for it to actually arrive at my home, on the day, and even around the time I was told it would, is ridiculous. I really didn’t know what to say.”

But the buyer indicated that the unprecedented move by the deliverer would actually cost him money in the long run. “I’ve already booked two weeks off work and put several thousand dirhams of credit on my cell phone in anticipation of the heavy workload involved with taking delivery of my purchase,” he said. “I’m at a loss for what to do now. I may go to Abu Dhabi for a few days, or perhaps see if I can pick up a flight to Lebanon. And ring my friends and family. A lot, obviously, at really expensive times of day.”

Delivery drivers in the emirate, meanwhile, have reacted angrily to the news. Union spokesman, Mindeepa Johnson, railed: “The thoughtless acts of this individual could have set a precedent that will reverberate for our members for years to come. The fact that a delivery driver should know the location of a building in the city is clearly bad enough, but to actually arrive there, at an agreed time, with the correct items in fully working order is a step too far.”

Johnson said that his initial thought was to ballot the union membership for strike action. “But the chances of any of them getting to our offices at a pre-arranged time are non-existant. Personally I don’t know where our offices are. I think they might be near the Burjaman, wherever that is, and there’s no way I’m taking a taxi – they don’t have a clue.”

White collar workers have also been angered by the event. A spokesman for the Arabian Association of Customer Service Drones commented: “This is very worrying territory. A vital part of our work as customer service operatives is building vital relationships with our valued customers. How are we supposed to achieve this if they’re not required to ring us at least 14 times to successfully complete what at face value is the simplest and most rudimentary of transactions?”

The driver at the centre of the storm, who has since gone into hiding, is believed to be new to Dubai and most likely comes from Germany, Scandinavia or one of those ‘oh look at us, we’re so efficient and everything works’ sort of places.