DUBAI: One of the most renowned DJs and musicians in Dubai has joined the ranks of Dr Dre, 50 Cent and Bob Marley, having put his name to a pair of designer headphones.

The DJH2Ks, which were unveiled last night by DJ Habibi 2000, are – according to the man himself – headphones like no others. 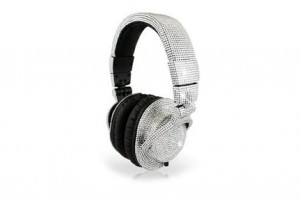 Critics have suggested the DJH2Ks are "too heavy" for practical use

“The DJH2Ks basically represent exactly what Habibi 2000 is about,” said the Beirut-born DJ at the launch party in Dubai’s exclusive Club Smug. “They’re luxury, they’re 5-star, and their the only headphones to come with an official ‘VVVIP’ rating.”

The headphones, which will land on shelves next week, come in two ‘flavas’; Designer Luxury in gold, and Exclusive Smooth in platinum. Each come with a recommended retail price of AED10,000, which includes a free bottle of ‘imported’ water at Club Smug. Both varieties are encrusted with over 1kg of Swarovski crystals.

“I basically tried to establish exactly what it was that my old headphones weren’t giving me,” said the DJ. “And then one night, while spinning a selection of urban grooves to a packed room of beautiful people, it struck me – I needed precious metals and crystals. Having spoken to a lot of my DJ friends across Dubai, it’s something they urgently needed too.”

Early reviews, however, have not been favourable, with several critics suggesting the DJH2Ks were too heavy for practical use and struggled with musical varieties beyond chart house.

But this hasn’t stopped cheap fake already flooding the market in Dubai’s busy neighbourhood of Karama. This morning, a pair of DJH3Ks could be bought for around $20.