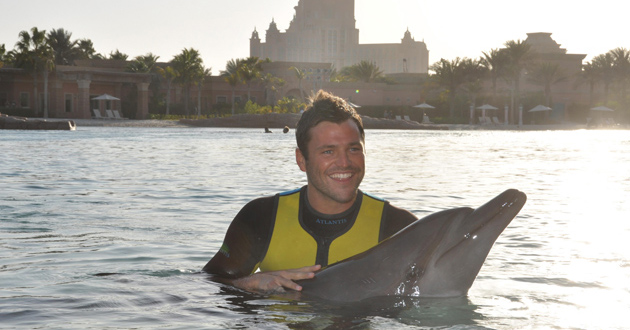 DUBAI: It’s a sight almost as iconic as the Burj Al Arab, the Burj Khalifa or a yellow Hummer taking up three parking spaces outside a Burger King. Since Atlantis opened on the Palm, Jumeirah in 2008, not a week seems to goes by without a new photo of a visiting celebrity with their arms around one of the watery residents of the hotel’s Dolphin Bay.

But this Dubai tradition could soon be coming to an end.

Happier times. Mischa Barton with one of the dolphins in 2008.

In an ultimatum that was leaked to the press this morning, a group calling itself Cross Porpoises claiming to represent the hotel’s dolphins warned that the current pod would be “refusing to participate in any marketing activity unless the calibre of celebrity was improved significantly”.

Over the years, the dolphins have appeared in promotional shots alongside international names such as tennis world number 1 Novak Djokovic, actress Mischa Barton and a succession of international models. But recently, claim the group, the standard has been “dipping to atrocious Z-list levels”.

According to the statement, “the dolphins were disgusted at having footballer wife Colleen Rooney, rubbish British TV presenter Dermot O’Leary and that fat one who sings in washed up reggae band UB40 smothering them with their sweaty lips”.

The final straw, it adds, came in January, when they were forced to appear with Mark Wright, star of UK reality show The Only Way Is Essex, something it claims the dolphins found “utterly degrading and completely soul-destroying”.

No dolphins were immediately available for comment, but the ultimatum claimed that unless the hotel starts attracting name along the lines of “Scarlett Johansson, Megan Fox or that hot leggy one from Gossip Girl” the animals would be refusing to cooperate. “And that means no jumps, no d*cking about with a ball and certainly no cheesy hugs with photogenic children.”