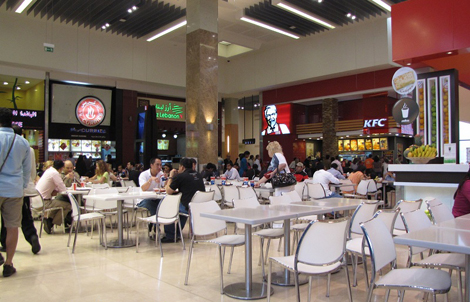 DUBAI: The United Nation’s cultural arm is set to bestow World Heritage Site status on one of the UAE’s most treasured landmarks.

Following its annual session that concluded yesterday, UNESCO’s World Heritage Committee declared that the famed Food Court in Dubai’s Mall of the Emirates, for long considered an important public space and meeting hub, will join the Acropolis, Petra and Angkor Watt in the list of sites protected by the organisation across the world.

“The Mall of the Emirates Food Court is the teeming heart of the city,” said UNESCO’s Middle East representative Malik Burger at the announcement. “It’s the nucleus at the centre of it all, a place where people from all walks of life come to congregate, to dine and to work.”

Burger claimed that the importance of the Food Court could not be underestimated, and likened it to ‘modern day Roman Forum’.

“Only here will you find confused Russian tourists rubbing shoulders with bewildered Keralan expats, where a lonely European businessman might share a wobbly table with a group of overweight Saudi children.”

The news has prompted several other food courts from across Dubai to apply for heritage status with UNESCO, but experts predict the next landmark to be given the nod will be Trade Centre Roundabout.