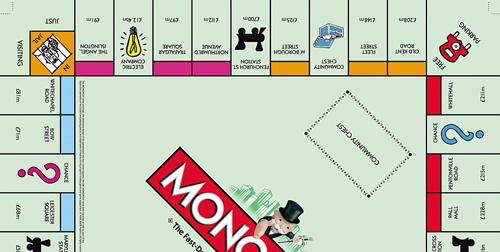 DUBAI: Plans for a local version of the popular game Monopoly have been scrapped after a failure to reach agreement of the positioning of the Emirate’s famous landmarks across the board.

It was hoped that the game would go ahead with the Burj Khalifa owning one of the prestigious dark blue spaces that are reserved for Park Lane and Mayfair on the original. But insistence by its owners earlier this year that, due to its unparalleled size and vision, the tower should take up two spaces has infuriated developers of other prominent constructions.

Asma Attak, spokeswoman for the Trade Centre Roundabout, said that the move, which would relegate the popular road landmark from a light blue square to a less prestigious brown segment, was madness.

Also upset are the management of The Greens, who have learned that their upscale residential development would be moved to a yellow space.

“It’s barbaric and we shall have no part in this farce,” they said in a press release.

The team behind Monopoly: Dubai finally announced this morning that they were putting the project on “indefinite hold”.

The final nail in the coffin is believed to be the insistence in the games rules that rent prices remain fixed, a move that many Dubai landlords had complained would set a dangerous precedent.