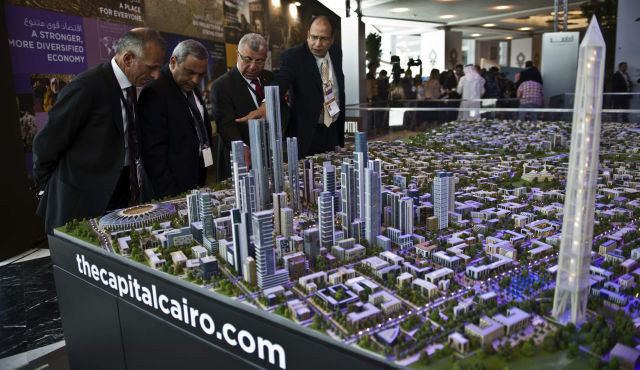 Having this week announced plans for a brand new capital city, Egypt is now furiously denying that it ever possessed a polluted, smelly, overcrowded, corrupt, riot-filled, politically unstable capital known as “Cairo”.

“This so-called ‘Cairo’ is nothing more than a Muslim Brotherhood/Ultra-Zionist conspiracy to undermine us internationally. It never happened,” Egyptian President Abdel Fatah al-Sisi told reporters, while revealing the site of the country’s new, pristine $100 billion capital, located in the desert east of the Suez Canal. “This imaginary ‘Cairo’ is an insult to the dignity of the country – if such a city existed, it would be a disgrace to the nation,” he added.

Asked what the giant, dark, odorous, unstable metropolis was over his shoulder, al-Sisi suggested that the media should focus on the upcoming new financial centre rather than “tiny, nomadic villages that are in no way the corrupt, Lada-filled, doomed, coup-heavy, tourist-fleecing capital of our great nation.”

The as-yet unnamed capital will include more than 2,000 schools, an airport larger than London’s Heathrow, a brand new government and embassy zone and will be “unprecedented in the modern world,” al-Sisi claimed, while advisors held up a large white sheet behind him.

“Keep your eyes on the president at all times, there is nothing to see back here,” they told journalists.

Speaking later to the Washington Post, al-Sisi also confirmed that he has been in frequent conversation with Israeli prime minister, Benjamin Netanyahu.

Netanyahu last week announced a new Jewish-only capital in the Negev desert to be called “Benjiville” and strongly denied ever hearing of a sectarian, riot-filled, divided mess called “Jerusalem”.