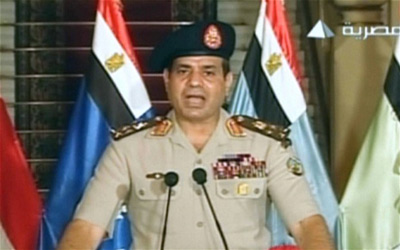 CAIRO: With the dust settling on Egypt’s latest major uprising, one major question has the country glued to its smartphones.

“Try as we might, we just can’t figure out whether it was a pro-democracy revolution or a full military coup,” said Hassan Mallick, who has been part of the protests in Tahrir Square since Sunday.

“That’s why we’re appealing to Twitter’s political commentators – both professional and amateur – to thrash it out for us.

“It’s all very well asking the bloodied and bruised people of Cairo, but what do young professionals in North London think? What is the vibe on the ground in Brooklyn? We’re just waiting to hear.”

Among those expected to help deliver a verdict is Lee Sturgeon, a 32-year-old London-based food writer, who has been engaged in “heated debate” via Twitter on the subject.

“A legitimate elected government was removed from office by the army, who also took over the media. Tell me that isn’t a coup!!!” was one of his more popular messages sent shortly after the military announced the new interim presidency of Adly Mansour.

“Sorry Lee, but a military coup does not give transitional political leadership to the head of a constitutional court! #WeAreAllTahrir #June30,” responded San Francisco-based marketing executive Freeman Parr.

As night fell over Cairo, thousands gathered round a giant billboard to follow the fast-moving online debate. However, cries of disappointment were heard when the discussion swiftly moved on to a new animated GIF of Taylor Swift.