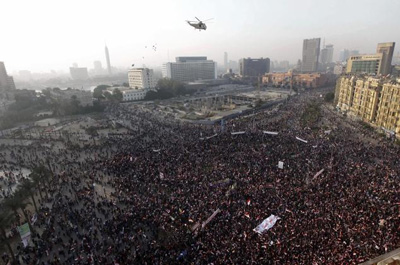 CAIRO: Three years on from the revolution that saw the toppling of former president Hosni Mubarak, thousands of Egyptians yesterday celebrated this anniversary with a series of historical reenactments held around the country.

Across Cairo, Alexandria, Giza, Minya and Suez, huge crowds gathered calling for the removal of the current government, expertly recreating scenes from January 25 2011.

“It’s super great to see Egyptians commemorating this important date in such a way,” said Dwight McCourt, a historical reenactments enthusiast from Minneapolis, USA. “And so many really put the effort in to wear accurate period clothing.”

Davos: Less Than 1% of the World Owns 100% of the World’s Gold-Plated Lamborghinis
IDF marks Diversity Week by harassing Somalians, a community of ethnic Kazakhs and at least three Colombians
Advertisement