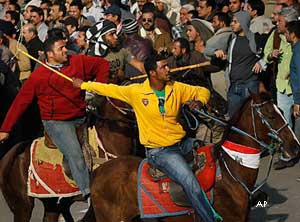 Egyptian heavies in action before demand dried up

CAIRO: As the fireworks and shoe-lobbing dies down over Tahrir Square, an entirely new protest has erupted in the Egyptian capital. According to organisers, a demonstration today will see up to 5,000 of Hosni Mubarak’s former thugs take to the streets in anger at the sharp rise in unemployment that has hit their profession.

“There’s been a forty-per-cent drop in despotism across the region the past few weeks and nobody seems to be doing anything about it,” said Badru Bing, chief spokesman for the National Union of Henchmen and Heavies, one of the main groups behind the march. “Today’s protest is all about making ourselves heard.”

While the toppling of leaders such as Egypt’s Mubarak and Ben Ali in Tunisia may be good news for preachers of freedom and democracy, it’s led to a sudden drop in demand for cronies and hired muscle.

“Just a month ago, we were a proud profession, able to hold our heads up high and beat the life out of people until they respected us,” said Omar Gawd, a former heavy for Mubarak with 25 years experience. “But with recent events we’ve seen the market completely dry up and wages plummet.”

Gawd says he is going to be hanging up his truncheon and electric cattle rod for good in order to spend more time with his grandchildren, but for many of his colleagues without pensions the only option is to search for low-paid jobs such as security guards at supermarkets or shopping centres. “Sadly, many employers are reluctant to hire the violent enforcers of their former oppressors,” he admits. “There’s definitely a stigma attached to our occupation now.”

The National Union of Henchmen and Heavies is calling upon the new government to install a retraining programme to help thousands of its members find new work.