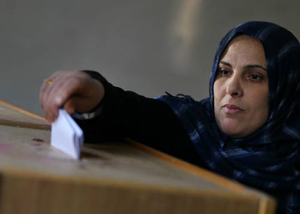 CAIRO: Egyptians take to the polls today for a historical presidential election seen by many as the final phase of a tumultuous transition overseen by the ruling military council following the ousting of Hosni Mubarak.

But while it is hoped millions would turn out for the country’s free and open elections, there are growing concerns that most Egyptian haven’t yet heard who they are expected to vote for.

“Well, we’re very excited, of course,” said Gerry al-Mander, a shopkeeper from Luxor. “But I would have hoped we might have received word by now which box we should tick. Without any official confirmation, it could really hurt the turn out.”

International observers in Egypt have commented that while most residents in Cairo and Alexandria were issued with details of which candidate to vote for late last week, there had been “extreme disorganisation” when it came to reaching the less densely populated areas of the country.

“Unless a concerted effort is make to get official voting confirmations to rest of the country by the time the ballots close this evening, this election is in danger of becoming a complete sham,” said one.