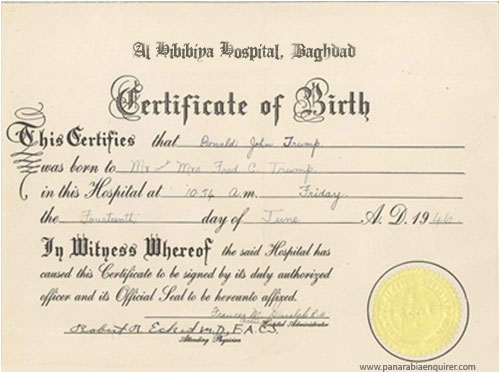 BAGHDAD: With Donald J Trump still relentlessly pursuing his birther claims against Barack Obama, The Pan-Arabia Enquirer can reveal exclusive evidence suggesting that the property tycoon’s own American heritage sits on ground almost as unstable as his hairdo.

Our investigators in Baghdad have unearthed a birth certificate from the public records office that indicates Trump was actually born in the city’s Al Hibibiya Maternity Hospital, and not in New York as he claims. Although the certificate is currently being examined for authenticity, our requests to The Donald’s office for the response have so far remained suspiciously unanswered.

Qatari emir visits Gazza, pledging $400 million
Jordanians on brink of being close to thinking about beginning something that might lead to era defining protest
Advertisement