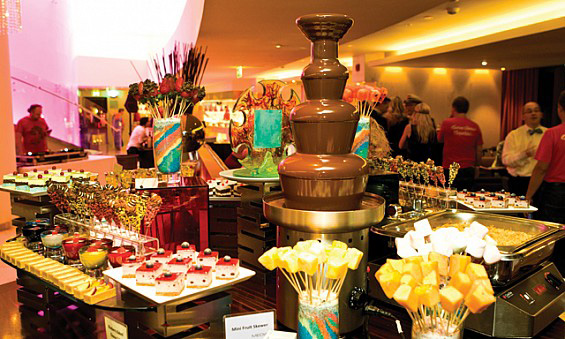 DUBAI, UAE: Despite the UAE’s great brunching season still being two week away, scores of expats have already been spotted gathering outside restaurants across the country.

In hotel lobbies in the main brunching grounds of Dubai and Abu Dhabi, nature fans have reported a dramatic increase in expats amassing for their long-awaited first all-you-can-eat session, with numbers significantly up from recent years.

“Usually by this time there might be a few Brits in pastel shirts and perhaps a vest-sporting Aussie or two starting to congregate in spots such as the Fairmont hotel or Mina A’ Salam ahead of the opening Friday of the season,” said brunching expert Gilligan Marks. “But this year I’ve already seen about 20 Brits, a handful of Australians, plus some Americans and even a few Lebanese.”

The exact cause of the rise is as yet unknown, but some are putting it down to a particularly harsh summer.

“I can’t say anything for certain, but I’d suggest the upturn in numbers is down to brunching season coming straight off the back of a month of excessive temperatures, with expats desperate to get that first thirst-quenching unlimited selected house beverage in their hand,” said Hatice Frikadeller, chief expat researcher at the WWF.

“On top of this, we’ve also seen the psychological effects of the recent escalation in violence across Gaza and Iraq. I think people just want to block it all out with about four to six continuous hours of eating and drinking.”