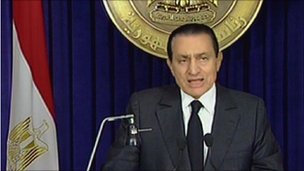 CAIRO: Following the dramatic speech in which a stubborn and confused old man declared the youth of Egypt to be his “sons and daughters”, millions across the country were last night reportedly inspecting birth certificates and demanding answers from their mothers.

“I can’t believe she’s been lying to me all this time,” said Hassan in Tahrir Square, adding that he had been led to believe his real father was a 59-year-old university lecturer called Dave. “I feel so ashamed and dirty.”

While millions of Egyptian mothers were facing a barrage of questions regarding prior relationships they may have had with Hosni Mubarak, many youths turned their anger on the man himself, accusing him of bad parenting.

“If he is my dad, then he’s got 24 years of catching up to do,” said Nasreen, 24. “That’s 24 birthday presents, 24 Christmas presents and a whole lot of cello recitals to attends.”

Others indicated that even if Mubarak was indeed their real father, they weren’t going to let him into their lives. “If he thinks he can suddenly show up, out of the blue, and then expect me to go with him to the zoo or something every other weekend, he’s got another thing coming,” said Issa.

“Why did he have to do it on television, in front of everybody?” asked another shocked protestor in Tahrir Square shortly after the speech. “If you’re going to drop such a bombshell on me and tell me that you’re my father, surely the decent thing would be to do it somewhere private, and not to the entire nation on a massive screen.”

Many across Egypt said they were now looking for ways to ‘divorce’ their newly acquainted father as quickly as possible. “I’m sure Macauley Culkin did it,” said one.