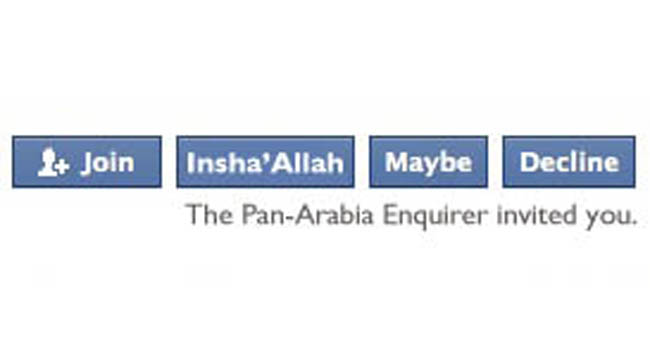 DUBAI: Following the opening of its office in Dubai, Facebook has revealed the first of what it claims will be many alterations to the social media site tailored to the local Arabic market. As of next week, users across the Middle East and North Africa will have to opportunity to respond with ‘Insha’Allah’ to an event invitation, along with the usual ‘Join’, ‘Maybe’ and ‘Decline’.

“This was the result of several focus groups across the region,” said Facebook Arabia’s Regional Solutions Manager, Majid Johnson. “Adding an ‘Insha’Allah’ button for Facebook events was by far and away the most popular request.”

“This was another big winner in our focus groups,” claimed Johnson. “Facebook Platinum is going to be our premium option for the more exclusive social media user. It’s going to come with a significant signing on fee, but will offer five-star services, such as a bespoke wall and 24-hour status concierge facility, along with space for just 50 members at one time.”