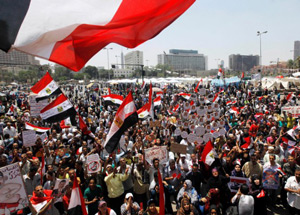 CAIRO: Just hours after the Egyptian military announced that Mohamed Morsi and his government were no longer leading Egypt, several protest groups were already organising mass demonstrations against the new interim presidency of Adly Mansour.

“We may have just forced the removal of Morsi, but we want to take advantage of the revolutionary momentum and use it overthrow Mansour too,” said Adham Shawash, leader of the newly formed July 3 Movement.

“In any case, we’d already booked Tahrir for a mass demonstration next Tuesday anyway, so we don’t want it to go to waste. However, we should probably find out what Mansour looks like to get some posters done up.”

Where’s Wally: Tahrir Square
Egypt anxiously awaits verdict from Western Twitterers on whether it was a coup or not
Advertisement