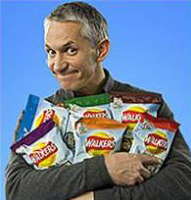 The former England striker and Walkers spokesman was caught out while presenting the UEFA Champions League match between Manchester City and Real Madrid when the camera switched to the studio for half time. Having not noticed the cue, Lineker was broadcast tipping the last remaining crumbs from packet down his throat, before burping loudly.

“I apologise unreservedly for my actions,” Tweeted Lineker later in the evening following a tirade of angry messages posted by viewers across various social media sites.