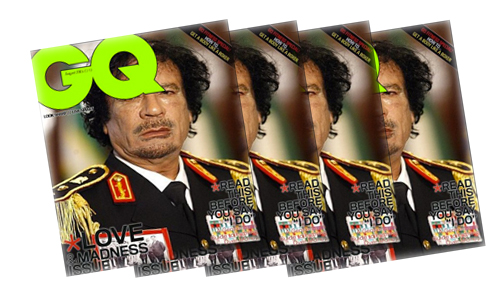 LONDON: In a controversial move, GQ magazine has this year awarded its annual ‘Most Stylish Man’ prize to Colonel Muammar Gaddafi. The Libyan president and self-proclaimed ‘king of kings’, currently suffering a public relations crisis following his ongoing bloody suppression of anti-government uprisings, was praised by the men’s magazine for his ‘dynamic use of colours’ and ‘bold interpretation of styles’.

“A sharp eye for excellent tailoring and clever coordination of materials should not be ignored simply because an individual is murdering his own people,” he told the assembled guests. “Muammar has repeatedly proved this year that you can combine the dapper with the despot, the sartorial swagger with the dictatorial dagger.”

Unfortunately, due to the no-fly zone currently being enforced by coalition forces over Libya, Gaddafi couldn’t attend in person, but gave a three hour long acceptance video in which he hailed all Western media, except from GQ magazine, as imperialist pigs, and thanked his stylist Rachel Zoe, who also counts Cameron Diaz, Anne Hathaway and Burmese military ruler Than Shwe among her celebrity clients.

The move comes just days after clothing retailer Topshop unveiled its new Gaddafi-inspired collection, including the flowing brown robes and beret-style hat he has been seen sporting in recent months. The unisex range – entitled ‘Colonel’ – sold out in under two hours after it went on sale.