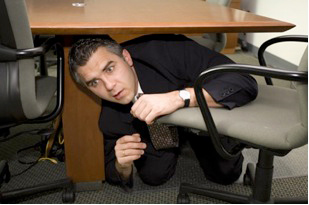 DUBAI: Gulf News journalist and one time Pulitzer Prize hopeful, Brad Connors, curled up under his desk and rocked slowly back and forth after writing today’s front page article on UAE Flag Day, according to reports.

“People stood united around the nation’s flag at 12 noon on Wednesday and chanted: Safety and security forever, long live our flag in the UAE,” wrote Connors in the article, before slinking under his desk, sucking his thumb and remembering the soft sound of the waves lapping against the beach in his Virginia homeland.

Just moments earlier, Connors had written out the full names and titles of several members of the ruling family that had been present at a Flag Day celebration, adding the quote: “We hereby renew our vow to the people of the UAE for their service and prosperity. We also renew our devotion to the soil and flag of this country and to enhance its status.”

After suggesting the headline: ‘UAE Flag Day celebrations: Long Live the Emirates, long live our country’, Connors selected a soft comfort blanket, two tubs of yogurt and a crayon before curling up under his desk to colour in a picture of an elephant.

“I remember when my editor at the Washington Post nominated me for a Pulitzer,” Connors told the elephant, as he softly coloured him blue. “An expose of police corruption that went all the way to the mayor’s office. I was destined for big things.”

“But, oh no, cutbacks and layoffs, the internet ruined everything,” he muttered as he painted the sky behind the elephant an angry yellow.

Concerned staff tried to lure Connors out of his hiding place with copies of The New Yorker and penetrating German investigative magazine, Der Spiegel.

“Don’t worry,” said editor in chief, Mike Newton. “I’d bet my editor salary that Connors will come out in time for his next assignment: a huge 24-page preview of next month’s National Day.”