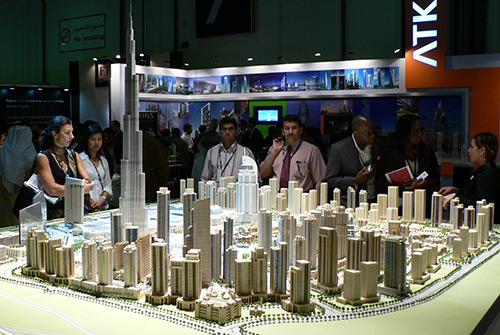 With Cityscape Global in full swing in Dubai, we look at some of the most exciting projects from this year’s real estate extravaganza.

Bear-Baiting City
Initially earmarked for 2007, this luxury residential and blood sports multi-use complex was put on hold following pressure from animal right groups. But following a lengthy battle with the World Wrestling Federation, developers claim the $50 billion project is ready to break ground in Kuwait, offering the “ultimate in grizzly, black, polar and even panda bear tormenting” when it opens in 2014.

Detroit
Bought out by Saudi investors earlier in the year, America’s bankrupt motor city is currently being shipped – bit by bit – to the desert near Dammam, where it will be reconstructed into a dazzling automotive theme park, mall and residential complex. But it’s worth buying early – you wouldn’t want to end up left with a property in one of the drug or crime-ridden neighbourhoods!

Cardboard Residences
This Qatari development will offer the last word in luxury accommodation for the expected influx of migrant workers for the 2022 World Cup preparations. Each block of 400 homes will house around 4,800 workers and come complete with standpipe offering occasional water, shared electricity socket and direct line telephone to the Nepalese Embassy.

Twerking Towers
Few of Cityscape’s projects can claim to be as ‘on trend’ as these vibrating adjoined residential towers cited to open in Abu Dhabi in 2015 and inspired by the action of ‘salacious jiggling’. Luxury apartments are already being snapped up by big-spending Miley Cyrus fans fast, but builders have warn the development could well be altered should the troubled singer “do anything else”.

Another Big Mall
In a response to demand from residents across Dubai, Another Big Mall should help fill the consumer void left by gaps in the city where malls haven’t yet been built. Among ABM’s numerous features are the world’s largest interpretative dance studios, a food court the size of Singapore and 363 Massimo Dutti outlets.

Riyadh Barbie Castle
Imagine waking up in a garishly pink bed, showering in a dazzlingly pink bathroom, getting changed in a luridly pink walk-in wardrobe and then going to meet your girlfriends in a shockingly pink coffee shop just a few floors below having taken the gaudily pink elevator! All this and more can be enjoyed by residents of the Barbie Castle when it opens in Riyadh next spring.

Dan Aykroyd Tower
Rumours that the Ghostbusters star was paid $50 million to put his name to this Dubai office tower remain unconfirmed, but one thing’s for sure – you won’t be feeling Blue(s Brothers) should you find yourself working there when it opens for business in 2016!