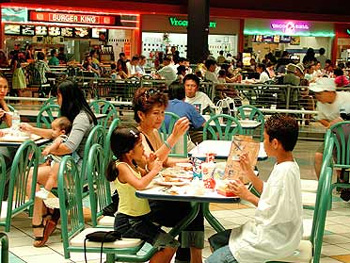 DUBAI: Hopes were fading last night for the people trapped in a Dubai food court since Monday. The diners, estimated to number at least 63, have been waiting for rescue since the food court’s two escalators unexpectedly malfunctioned at around 2.35pm, leaving them stranded on the fourth floor of the Mall O’ Dubai, an Irish-themed shopping centre in the centre of the city.

Attempts to get the escalators restarted have so far proved ineffective and experts now fear food supplies were running short.

“From the communication we’ve had, we understand that they’ve already eaten all of the burgers from Quikee Bitez, Chuckin’ Chicken and are now close to finishing everything in Miso Tasty, the Japanese fast food joint,” said head rescue chief Ewan Hoosarmy, adding that the last remaining restaurant, Salad Tastic, was only likely to see them through till Thursday afternoon.

“Should we still be unable to restart at least one of the escalators by then, we’ll consider airlifting food into the court to keep everyone going until we consider another option.”

Hoosarmy said that a final resort would be to ask the people to walk down the escalators themselves, but this was posed a serious risk because “the majority of those trapped were either extremely young or obscenely obese”.