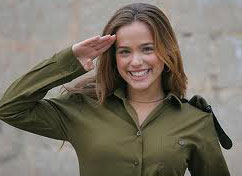 TEL AVIV: The Israeli Defense Forces this morning put out a casting call for a “female model, ideally blonde and with television experience” to act as a spokesperson during the latest conflict in Gaza.

In an advert that appeared in The Stage Tel Aviv magazine, the IDF requested girls aged 19-25 with “glossy, sun-kissed hair” and “intelligent yet carefree demeanour”. They also said that the girl should be “happy to wear dark-rimmed secretary-style glasses if necessary”, and have the ability to “lie repeatedly on camera, but in a flirtatious way that would make you want to ask her out for a drink afterwards”.

“Basically, we need someone to help us convince the world that dropping bombs on the most densely populated place on earth is still an act of defence, and research has shown that using someone with those cute, girl-next-door looks is the best way to do it,” said defence minister Ehud Barak.

Several insiders have claimed that the move is a result of the international PR fallout following 2009’s Operation Cast Lead. “The spokeswoman we had at the time, Tzivi Lipni, had a bit of a severe, bulldog-chewing-wasp thing going on,” said one. “No magazine was going to stick her on the cover.”