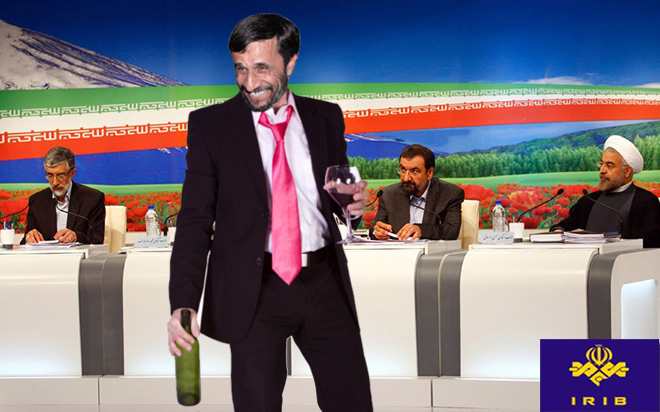 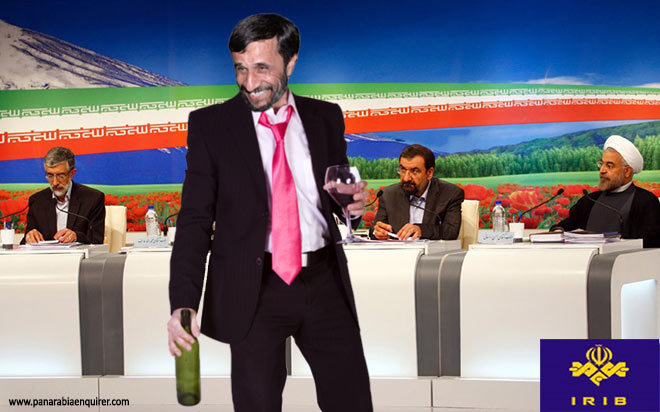 Iranian government officials are claiming that this image, reportedly taken seconds before the presidential candidates debate was taken off air, has been faked

TEHRAN: One of Iran’s most popular TV stations was briefly taken off air last night after a live presidential debate was reportedly gatecrashed by an intoxicated Mahmoud Ahmadinejad.

According to eyewitnesses, the Iranian president – who cannot stand in the election having served the maximum two terms in office – unexpectedly burst into the studios of the Islamic Republic of Iran Broadcasting, appearing “somewhat inebriated” and began heckling the candidates, who had just begun a round of questions based on their hatred of Israel, strict interpretations of Islamic doctrine and choice of presidential pet.

“[Ahmadinejad] was stumbling around, pointing at people and slurring a load of stuff about how he was the only one who knew where the big red button was,” said a source. “He looked terrible and absolutely stank of whiskey, I think he was still clutching a bottle.”

After a few seconds of confusion, during which time viewers reported that a figure resembling Ahmadinejad managed to get onto the stage and jab a finger into the face of Hassan Rouhani, considered the most liberal of the eight candidates, the programme was finally taken off air. An official statement from the network blamed a “technical problem” for the situation.

Meanwhile, Ahmadinejad’s office was quick to deny that the president had been anywhere near the studio and warned against spreading the accusations on social media.

“At the time of the TV debate, the president was in a meeting with a group of the country’s leading scientists discussing efforts to manufacture nuclear weapons from enriched uranium,” Ahmadinejad’s press officer told reporters.