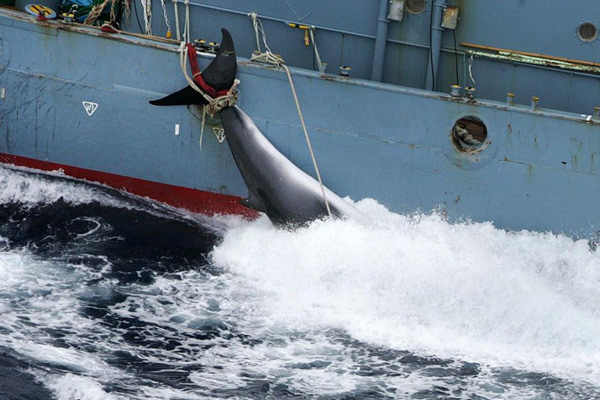 TEHRAN: Moby Dick and Free Willy might not be around any more, but if they were they’d probably want to avoid the azure blue waters of the Arabian Gulf/Persian Gulf (delete as appropriate).

In a shocking announcement made this morning, Iran launched a new whaling program with the aim of “reasserting itself as the bastion of international evil”.

Hassan Rouhani’s election as president last summer has seen relations between the Islamic republic and the West dramatically thaw following years of isolation under Mahmoud Ahmadinejad. But hardliners have lamented the country’s fall from grace as the most hated nation on Earth.

“Just a few months ago, the mere mention of Iran would send shivers down spines the world over thanks to our nuclear enrichment programme, our perceived global influence and other seemingly despicable activities,” said Hossein Taramasalata, head of the newly-formed Iranian Whaling Committee.

“But since Rouhani took office with his big cuddly face, it’s been all new dialogue this, opening of sanctions that… if someone were to draw up a new Axil of Evil, Belgium would now have a better chance of getting in than us.”

Iran’s new batch of whaling vessels will become operational next week, and many hope the site of a bloodied minke lying on the deck of a boat will propel Iran back up the terror ladder.

“We’re going to be using some big nets as well, so we might even ‘accidentally’ catch a few dolphins or the odd turtle too,” added Taramasalata.