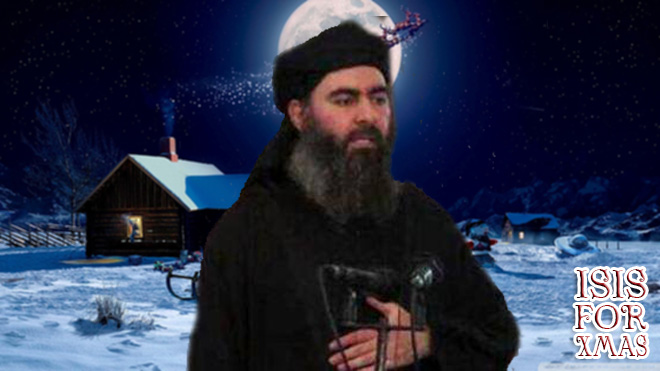 It might not even be December yet, but many are already saying that the hunt for the best Christmas TV commercial is already over. Unveiled last night, the big-budget ad from the Islamic State has won over both critics and casual observers for its cheeky charm and seasonal warmth.

Rumoured to have cost upwards of $2 million to produce, the advert features ISIS leader Abu Bakr al-Baghdadi giving a fiery sermon in a frost North Pole setting to a group of CGI-animated reindeers and cheerily coloured elves. Midway through a passage in which he urges the crowd to “erupt volcanoes of jihad”, the terror frontman is interrupted when a dancing troupe of balaclava-wearing ISIS soldiers burst out from behind a Christmas tree singing Santa Claus is Coming to Town. Eventually, al-Baghdadi puts on a Father Christmas hat and joins in.

The $10 million campaign launches internationally next week, with many saying it could help reverse the mostly negative perceptions of ISIS.

“If you’ve been making headlines for all the wrong reasons like ISIS, a well-targeted festive marketing campaign with a splash of humour is the perfect tool to win back hearts and minds,” said marketing expert Abby Morgan. “I wouldn’t be surprised if this generates a whole new fanbase for the caliphate.”

The ad world is now awaiting a possible response from al-Qaeda, who were last year criticized as having a “lack of imagination” for a 24-second commercial simply featuring leader Ayman al-Zawahiri reading aloud a passage from A Christmas Carol while wearing a party hat. Major global agency Ogilvy are now believed to be working with the faltering terror giants.