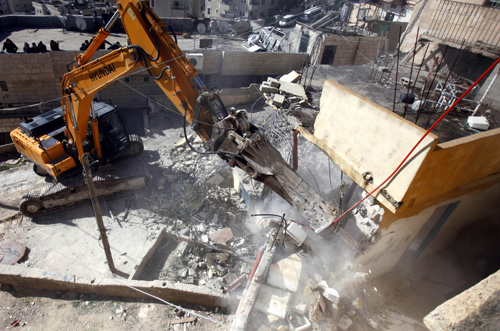 JERUSALEM: Israeli bulldozers this morning demolished an extension to the peace talks between Israel and Palestine, following local authority claims that it did not have the necessary planning permission.

Mediators had been working to prolong the stalled negotiations beyond the April 29 deadline, but within hours of an extension being announced the Israel-controlled municipality declared that it had been added illegally and ordered its immediate destruction.

“Like most Palestinian homes in the area, putting any sort of extension on the peace talks requires the acquisition of a special permit from Israeli authorities,” said local council member Shimon Levi, adding that, due to various “administrative complications”, the bureaucratic process could take several years and only a very small number of applications were ever accepted.

“John Kerry should just be thankful that we didn’t issue him with a fine or force him to demolish the extension himself, as per our usual policy!”

At the time of going to press, the municipality was reportedly looking to evict the delegates from the peace process and install a family of Israeli settlers recently arrived from the US.