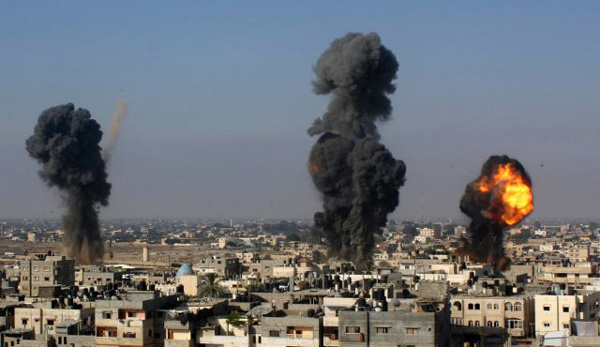 TEL AVIV, ISRAEL: There may be no end in sight for Operation Protective Edge, but the Israeli government is already looking ahead to its future military offensives.

Speaking to reporters this morning, prime minister Benjamin Netanyahu unveiled a new competition that will soon run in schools across Israeli to name the next brutal invasion of Gaza.

“It’s all about engaging Israeli youth, our brave soldiers of tomorrow,” he said. “The next time we send our tanks and warplanes to fight Hamas in the terrorist tunnels, rocket storage facilities and children’s hospitals of Gaza, probably around Christmas time, we’d love for a youngster somewhere in a school in Israel to be able to say: ‘I named that operation’.”

With the IDF having launched Operations Cast Lead, Returning Echo, Pillar of Defense and now Protective Edge in recent years, Netanyahu said the task was on for a budding Israeli military marketing whizz to come up with a similar title.

“We want something that conjures up powerful images of strength and courage in the face of a deadly attacking force… them not us,” he said, adding that “it would also help if, in keeping with the others, the name had a hint of prog rock album to it as well.”