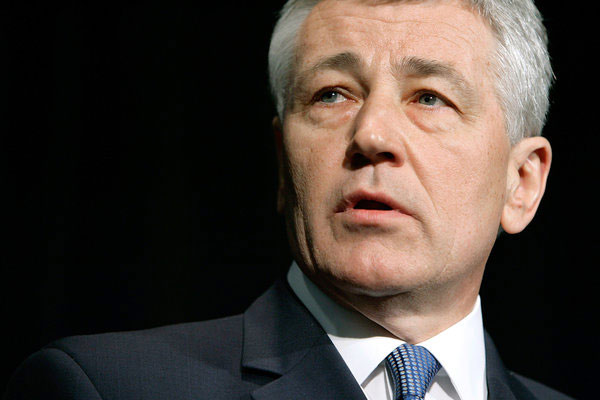 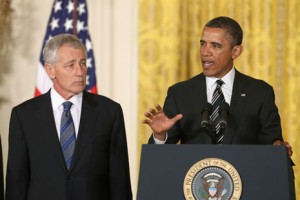 Chuck Hagel (left) faces scrutiny for once suggesting Israel “wasn’t the most wonderfulest, most peace-lovingest nation on the planet”

TEL AVIV: In a prepared statement Monday evening, the Israeli government said it was “very much looking forward” to working with Obama’s nomination for US Defense Secretary, Chuck Hagel, and promised to “disregard anything he might say that contravenes Israeli policy”.

Hagel’s nomination by the president has come under fire from critics, who claim that the former Nebraska senator has occasionally strayed from the standard US government script of giving Israeli unequivocal support for everything it does, no matter how close it brings the world to all out war. Particularly emphasis has been put on a comment he once made about the power of the pro-Israeli lobby in America.

“It was a vile, anti-Semitic comment that highlighted Hagel’s hatred of the peace-loving nation of Israel and the Jewish people,” said a member of a powerful pro-Israeli lobbying group in America.

In the wake of the criticism, Hagel has been forced to backtrack on many of his informed and well-reasoned points regarding Israel in order to appease the powerful pro-Israeli lobby.

Speaking to CNN, he described his perfectly valid and thoughtful statements as “moments of madness” and confirmed that his future stance towards a Middle East country smaller than most US states would be one of “dogged, unwavering backing and fawning sycophancy”.

Many pro-Israel lobbying groups have suggested that to avoid such complicated situations in the future, it would be more efficient for the Israeli government to choose the US president’s cabinet. “It would save an awful lot of hassle,” said a source.