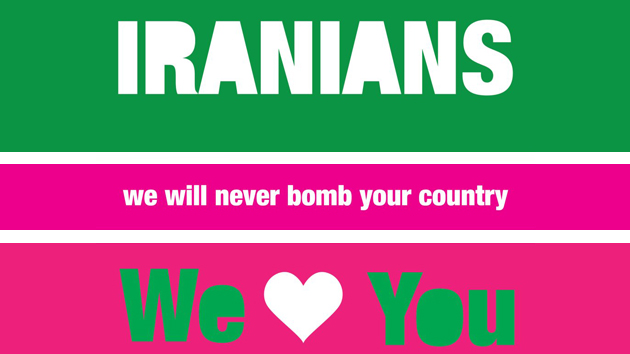 The recent ‘Israel loves Iran’ online campaign that has amassed tens of thousands of followers on various social media platforms is, according to Israeli foreign minister Avigdor Lieberman, the work of anti-Israeli extremist groups.

“It has clearly been set up by Hamas, or some other terror organisation intent on destroying our beloved country,” said the Soviet-born statesman, who has advocated the drowning of Palestinian prisoners in the Dead Sea, the removal of Arab Israelis from within Israeli borders and annexing of Israeli settlements in the West Bank.

A video posted on YouTube showing Israelis of different ages sending messages of love and peace to Iranians has been viewed over 100,000 times, but the politician, who once punched a 12-year-old boy in the face, claimed it had been created overseas by corrupt anti-Semitic foreign forces.

“The video bears all the tell-tale signs of a radical anti-Israeli organisation that is looking to derail our fair and just plan to bomb the sh*t out of Iran, ideally with US support,” he said, adding that the Israel Loves Iran Facebook group, which now has some 40,000 members, was also the “work of extremists”.

In response, Lieberman and Netanyahu yesterday unveiled their own social media campaign, #IsraelDoesntLoveIranAtAll, complete with a Facebook group and YouTube video showing Israelis of varying ages looking at a picture of Ahmadinejad and shaking their fists and making bombing noises.