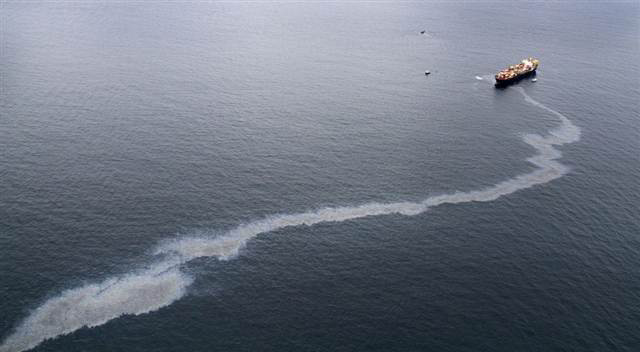 DUBAI: Coastguards across the UAE are on high alert following a shipping accident last night that environmentalists have warned could be among the country’s worst maritime disasters.

At around 8.34pm yesterday evening, the Dutch freighter Randy Juggernaut hit rocks off the coast of Jumeirah, unleashing much of its 50 ton cargo of European adult material into the innocent blue waters of the Arabian Gulf.

While initial reports suggested the spill could be easily contained, high winds have sent the jazz periodicals floating towards the coast of Dubai, and authorities are concerned that this ‘art pamphlet slick’ could reach shores by this afternoon.

Teams of frogmen from the elite Navy Oryxes, armed with waterproof marker pens, were deployed late last night to cover up as much of the sinful flesh as possible, but one expert suggested that with “at least 5,000 cubic metres of bongo mags heading towards shoreline, even the highest estimates would see only 10 per cent being censored in time”.

“It’s a complete and utter nightmare,” claimed Jumeirah mother-of-two Rita Balfour. “Are we simply expected to sit and wait until this tidal wave of filth rolls into town. What about the children?”

Residents, especially families with teenage boys, have been urged to avoid beaches at all costs until the gentleman’s literature has been broken down by the sea’s natural enzymes, a process some claim could take upwards of three months.

However, not everyone is upset by the news.

“This is the best news I’ve heard since dad forgot to sort out the computer’s parental controls,” said 14-year-old Ahmed Dobson. “A load of us are heading out in a boat later.”