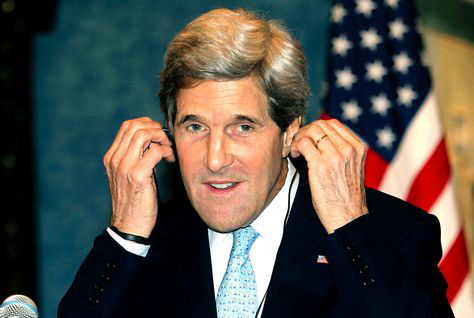 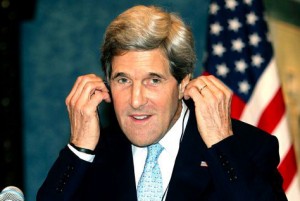 John Kerry with his chin

JERUSALEM: Currently on an official visit to the region, US secretary of state John Kerry yesterday launched what political observers are describing as a new ‘Chin-Based’ attempt to revive the flagging peace process between Israel and Palestine.

“Over the past few years, we’ve seen countless politicians fail to achieve any tangible results, with both sides still at loggerheads and unable to move forward on any issues” said an advisor within Kerry’s camp. “So the secretary of state went back to the drawing board and took a good look at what exactly he could bring to the table, which turned out to be his chin.”

So far, the result of this chin diplomacy have been received optimistically, with both the Israeli and Palestinian sides now hinting that they would agree to certain concessions that could help reignite negotiations.

“It’s amazing to see what something so simple as a big chin can achieve when you’ve got a situation as complicated and delicate as this,” said Arab political observer Dunstable Rudd. “If only previous politicians had boasted such an enormous lowermost part of their face, perhaps this whole issue could have been solved decades ago.”

Should Kerry’s chin-focussed strategy prove successful in the Middle East, the policy is expected to be deployed in troubled regions such as the Korean peninsula and parts of Africa, with other chin heavyweights likely to enter the political arena.

“Jay Leno is watching with interest,” said a source.