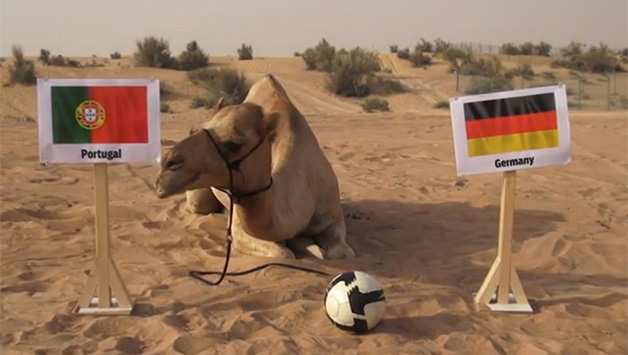 DUBAI, UAE: A Gulf News journalist reporting on a camel that picks World Cup winners once dreamed of shaking the global geopolitical landscape with the power of his writing, he conceded yesterday.

“I thought I’d force a politician to resign after exposing his links to an international narcotics cartel that involved Swiss bank accounts and links to secret masonic societies in the Vatican,” he said, while deliberately scenting a piece of paper with camel food so Shaheen might finally get one right.

“Oh look, he choose Argentina to beat Bosnia. What are the chances?” Durrell said, while remembering when he once vowed to bring down the entire US military-industrial complex.

Shaheen, who failed to predict the winners of Brazil V Chile, Croatia V Mexico, Ecuador V France, Algeria V Russia, Brazil V Mexico, Spain V Chile, Uruguay V England and Germany V Portugal, has no concept of football, has no idea the World Cup is taking place and knows only that bi-pedal ape-like creatures are withholding her food until she bites a piece of paper.

“Find out who our resident hump-backed football genius thinks will win today’s match,” wrote Durrell yesterday, while sobbing silently as he remembered his college boast that he would be “editor of The Guardian in four or five years max.”

“I’m still on track for that,” he said, while frantically trying to get Shaheen to choose Brazil against Colombia. “You don’t get anywhere in journalism without Middle East experience.”