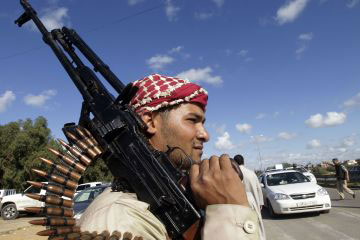 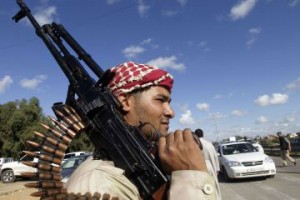 TRIPOLI: With just hours remaining of a deadline issued by Libyan authorities for armed militias across the country to vacate their bases and disband, several armed militias have spoken out against the ultimatum, accusing the government of unfair discrimination.

“Once again, it’s the poor gun-toting mercenaries and militias that are made the fall guys,” claimed Abu Gallagher, head of the Slim Shady Brigade based near Benghazi. “I’ve got over fifty heavily-armed fighters with mouths to feed. What exactly does president el-Megaref suppose I tell them and their families?”

For Nathanial Shambala, head of the So Solid Crew which last night was evicted from its base in Tripoli, the latest situation had forced him to move the group’s administrative operations into his sister’s spare bedroom.

“How am I expected to run a successful band of soldiers from within a room that has posters of One Direction on the wall, it’s just embarrassing,” he told the Pan-Arabia Enquirer.

Shambala added that his militia’s eviction came shortly after they’d completed a series of expensive renovations on their former base.

“We’d only just had the downstairs toilet done up and fitted a new eco-friendly boiler unit,” he said. “I can’t imagine we’re going to be getting any compensation for those, and don’t even want to think about the fine amassing on the rental DVDs we were forced to leave behind. We didn’t even get to see the end StreetDance 2!”

Despite these accusations of unfair treatment, negative public opinion across Libya towards the militias shows no sign of abating. A Facebook group set up by the Slim Shady Brigade entitled ‘Save Our Armed Radicalised Groups’ had just 23 likes this morning.