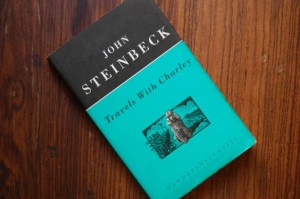 Travels With Charley, the book that has inspired a heavily sponsored two week jaunt across the UAE with a pet tiger

ABU DHABI: This year marks half a century since the publishing of John Steinbeck’s classic Travels With Charley, the acclaimed novel that recounted the iconic US author’s journey across America with his French poodle and a book that helped earn him the Nobel Prize for Literature.

To honour this 50-year anniversary, one Steinbeck fan in Abu Dhabi is hoping to have his own ‘Travels With Charley’-style adventure across the UAE.

Waleed Sinth, 35, says he plans to spend two weeks driving around the seven emirates of the UAE, learning about the various different socio-economic groups of the country as Steinbeck did in the USA fifty years ago. But instead of driving and sleeping in Steinbeck’s famed campertruck Rocinante, Sinth has managed to arrange sponsorship deals that will see him take the wheel in the latest Range Rover Evoke and sleep in branches of the Ramada hotel during his journey.

“I can’t wait,” said Synth at a press conference to announce his tie-up with clothing store Massimo Dutti, who will be kitting him out with a whole new wardrobe for the trip. “Following in Steinbeck’s mighty footsteps will be a dream come true for me.”

Unlike his hero, Sinth won’t be chronicling his experiences in a book, but will be live-tweeting as he goes thanks to a deal with Nokia to promote their new range of Smartphones. “It’s going to include everything about my adventure, right down to the fast food restaurants I drive-thru on the way.”

And in place of Charley, Sinth has his own faithful companion for those long dusty roads.

“Of course, I’ll be bringing Tiddles, my pet tiger,” he told reporters.

The Pan-Arabia on the TV
George Galloway: The Musical to debut in Beirut
Advertisement