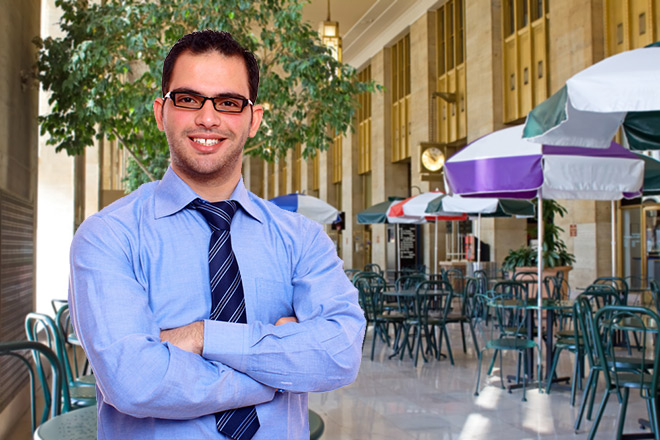 Rami Fakked can vividly remember when he had the ‘eureka’ moment that led him down the road to winning the coveted Entrepreneur of the Year award at a glittering ceremony last night in Dubai.

“I was about mid-way through a six-month holiday in the USA, and one morning happened to visit a branch of Clucky McChickens to grab some lunch,” explains the 34-year-old Iraq-born businessman.

“I remember it tasting good, but thought nothing more of it. Then, later that night, as I lay in bed it suddenly struck me. It was like a bolt of inspirational lighting, a voice from the heavens. I knew then that I was to bring Clucky McChickens to the Middle East.”

Already a hugely successful fast-food chain across North America with over 3,000 outlets, Clucky McChickens had been serving its legendary half-pound McChuck fried chicken burgers to millions of hungry customers for almost 20 years.

But fortune was on the side of Fakked, for nobody had yet picked up the Middle East franchise rights. Having already seen others beat him to secure deals with several other well-established international brands in the past, he knew that this was the time to strike. And six months later – thanks to an interest-free loan from his father’s investment fund – Fakked was able to open the first branch of Clucky McChickens in Dubai.

“I really had to pull together all my creative juices and business acumen to make it work,” he says. “From copying the exact look and feel of the US branches to replicating their menus, it was a daunting task. Thankfully, there was a team of experts employed to help me and my dad was able to lend me just enough money to secure a prime location and launch a major advertising campaign.”

Fakked’s determination and perseverance paid off and within 18 months and following several more financing arrangements he had opened six more franchises. Fast-forward three years, and there are now no less than 32 Clucky McChickens across the GCC, with six more identical outlets due to open soon.

“Winning Entrepreneur of the Year award means the world to me,” smiles Fakked. “When you’ve constantly got your head in the clouds dreaming up new innovations or looking overseas at what’s already doing well and seeing if you can buy the idea, it’s easy to forget to appreciate one’s own hard work and achievements. Now, every time I see this award I can say to myself ‘I did that’.”