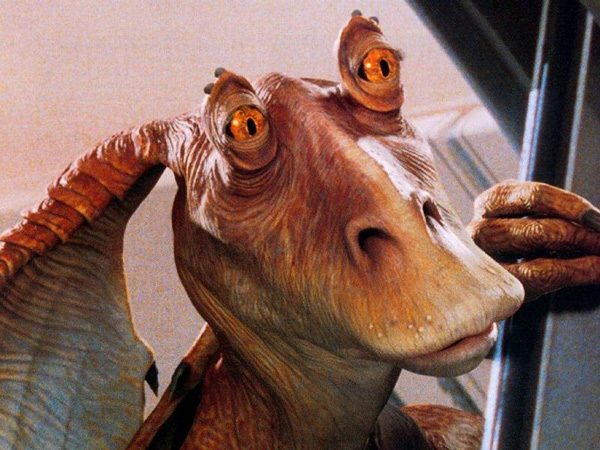 “It would be a disaster for all humanity if this deeply annoying, demographic-driven and utterly vacuous irritant, who was only included in the ‘Phantom Menace’ to appeal to under-7s, were to make it into the next Star Wars franchise,” said Abu Dhabi police commander, Lt. Khalid Al Hosseni.

“The reputation of the armed forces is at stake,” he said. “Binks’ high-pitched, cloyingly ‘humorous’ antics will not be tolerated for the months that Star Wars is filming here,” he said.

Binks, described as 172cm tall and from the Gungan tribe, was last seen on the perimeter fence of the set in the Western Region of the Abu Dhabi desert, swigging from a bottle and arguing with security guards that he should be allowed to speak to George Lucas.

“Imma have a rap with George Lucas, know what I’m saying Bro?” he said, in a deeply annoying and racial offensive take on Caribbean American speech patterns for which he has become globally despised.

Binks, consistently voted the most tedious film character of all time, later returned to his hotel room in Abu Dhabi to sell junk bonds to Florida retirees over the phone.

“Imma only do phone sales part time,” he told our reporter. “Imma be a star again, know what I’m sayin’?” he added.