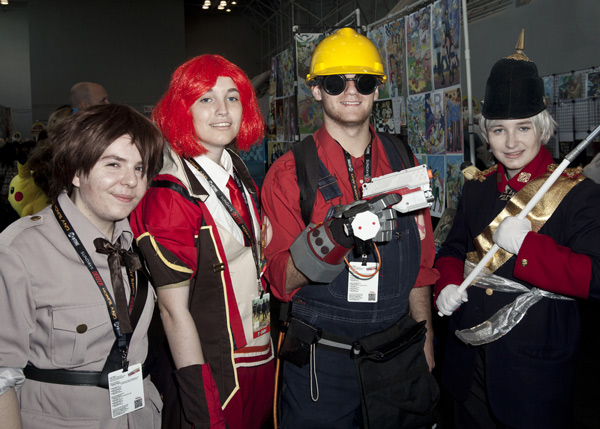 DUBAI: As this year’s eagerly-anticipated Middle East Film and Comic Con opens its doors, debate is raging among attendees over which costume will win the heart of Cindy Miller, the hot promo girl working on a energy drink stand.

“She’s going to totally dig the Sith lord thing, for sure,” 17-year-old Mohammed Bashar told reporters, scratching his torso under a rough woolen cloak. “The fabric is playing hell with my eczema but man, it’ll be worth it. I can’t wait to bring her to games night.”

Equally confident was 26-year-old Hugo Pym, who has already spent two hours standing next to Miller’s stand in his customised Wolverine outfit. “I’ve had four cans of that stuff she’s giving away,” said the visibly shaken geology PhD student. “I feel awful. But I could tell she was into me from the way she said ‘would you like a free sample?'”.

“Yeah I want a free sample,” he added with a leer, failing to catch the gum-chewing Miller’s eye.

Miller herself, however, remained tight-lipped on which ensemble would be sweeping her off her feet.

“I don’t really know about this wizard and alien stuff,” she said. “My boyfriend and I prefer Adam Sandler movies.”