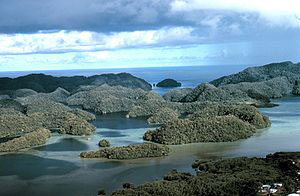 NEW YORK: Relations between the Middle East and Palau, along with fellow South Pacific nations Micronesia, Nauru and the Marshall Islands are at an “all time low”, claim diplomats in the United Nations.

The news comes just days after the UN vote on Palestine’s non-member observer status, in which the Marshall Islands, Micronesia, Naura and Palau – with a combined population of less than five per cent of the Palestinian territories – were among the nine member states to vote against the move.

“I’ve never seen political and economic relations between these small, pathetic, US-arse licking islands in the South Pacific and the Middle East this bad,” said a source. “It’s almost as if the region has totally forgotten these tiny islands somewhere in Oceania even exist.”

Estimates suggest that trade between the Middle East and Palau was set to drop to $0.30 for 2013 from a record high of $1.12 last year.