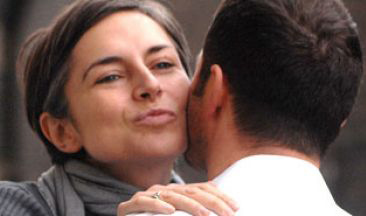 Following what has been described as “a generation of awkward and uncomfortable introductions and goodbyes”, countries across the Middle East have come together to help standardise the number of air kisses given as a greeting.

“As our nations become increasingly multi-cultural, the air kiss is developing into a hugely problematic issue in society,” said Frieda Bumford of the Gulf Institute in Doha. “With one kissers, two kissers and three kissers now commonplace and living amongst each other across the region, we’ve been witness to hundreds of thousands of incidents over the years. Something had to be done.”

Bumford pointed to a recent survey that showed a “disturbing number” of situations in which those used to three air kisses had been left hanging mid-air when greeting a one or two kisser.

“Research has shown that such occasions have been hugely damaging to our personal and business relationships, leading to great discomfort and embarrassment in offices and at social gatherings,” she added, pointing to British expat men as the “worst offenders when it comes to air kiss-related awkwardness”.

Reaction to the move on social media channels was mostly positive.

“As a two-kisser often caught in terrifyingly uncomfortable moments with one-ers and three-ers, this is welcome news,” said @StickyFingers72.

Although a standard number has yet to be agreed upon, Bumford suggested it was likely to be “at least five”, so as not to appear to show favouritism to any of the current air kissers.

“We’re also hoping to finally set a rule for whether to start with the left or right cheek, as we’ve already lost too many good people to unfortunate and avoidable headbutting incidents.”