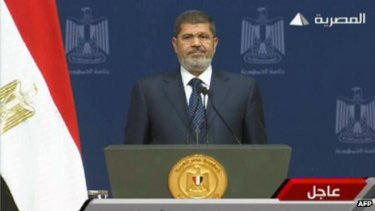 CAIRO: He’s one of the biggest names in Egyptian politics, but bootylicious Egyptian Premier Mohamed Morsi is fighting accusations that he lip synched throughout last night’s controversial televised address.

Wearing a figure-hugging dark blue suit that left little to the imagination, ‘MoMo’ took to the stage for a three-hour speech marking his first year in office.

But all debate regarding the country’s flawed democratic process has been quickly sidelined, as fans across the country demand to know whether the A-lister was, in fact, speaking live.

“He iz def mimin” said @DownWitMomo222, one of Morsi’s eight million Twitter followers, during the speech. “he took a drink & the voice kept goin!” added @MorselsofMorsi.

A spokesperson for the president admitted: “MoMo does sometimes use a pre-recorded backing track to add depth and body to his rhetoric. But fans can be assured that last night he was definitely speaking live, and will be throughout his forthcoming 24-date tour of the country.”

Morsi himself has not commented on the allegations, beyond a tweet sent last night which read: “Am so blessed 2 b speaking 2 all these angry egyptians..peace & love #MomoTour2013”