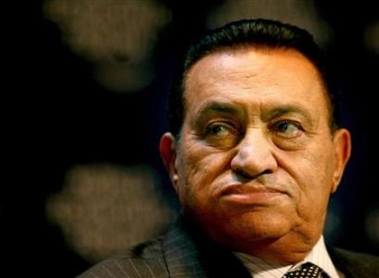 One of Hosni Mubarak’s closest aides has revealed that the former Egyptian ruler was devastated at having to leave office several months before he actually wanted to.

In an exclusive interview with The Pan-Arabia Enquirer, Clive Sugden, who had been among Mubarak’s key political advisors for the last decade, explained that the 83-year-old was “close to tears” when he finally handed over the reigns of power.

“He was almost three-quarters of the way through renovating the presidential palace, and was absolutely gutted that he wouldn’t get to see it through,” said Sugden. “The downstairs bathroom was almost complete, and he’d just selected a new floral wallpaper for the spare bedroom.”

According to Sugden, Mubarak had spent much of the past five years looking at fixtures and fittings, and working alongside his wife at selecting a new colour scheme for the interior. “They’d opted to move away from the old-fashioned off-white mix that had been in place since he moved in in the early eighties to a more daring blend of terracotta sunrise throughout the hallways and ocean spray for the bathrooms,” said Sugden, who admitted that Mubarak hadn’t been keen at first, but was warming to the idea as the work progressed.

“He was just so upset that all those hours spent poring over colour palettes and wallpaper selections went to waste,” said Sugden.

“And when he realised that he’d never get to use the new standalone bathtub he’d specially ordered, that was the final straw. He just broke down screaming, ‘why? why? why?’”