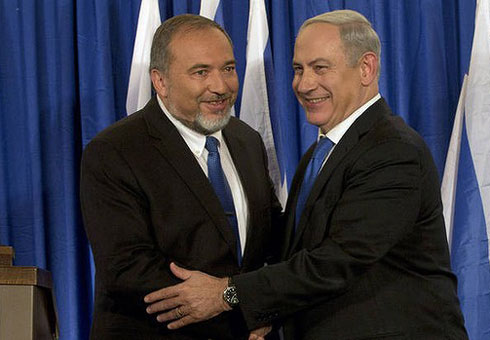 TEL AVIV: Just weeks after announcing their parties were going to merge for January’s Israeli elections, Benjamin Netanyahu and Avigdor Lieberman have revealed the name of their new political union.

“Having taken the values of both the Likud and Israel Beiteinu parties into consideration, myself and my close ally Mr Lieberman have chosen to call our new coalition the Utter Right-Wing Bastard Alliance,” said Netanyahu in a statement.

And according to sources within the alliance, both politicians have been “churning out” new extremist policies over the past week.

“They’ve really been on fire,” said one. “In just a few hours, they came up with hundreds of ideas for new right-wing bills, including one giving settlers the right to claim Palestinian land in the West Bank if it had been left empty for more than five minutes and a free one-way bus service for Arab Israelis to take them to the border so they can please leave the country. There’s been rather a lot of high-fiving going on.”

However, the source did admit that there had been “several chuckles” in the alliance’s HQ when it was revealed that many of the new extremist policies drawn up were already in place.