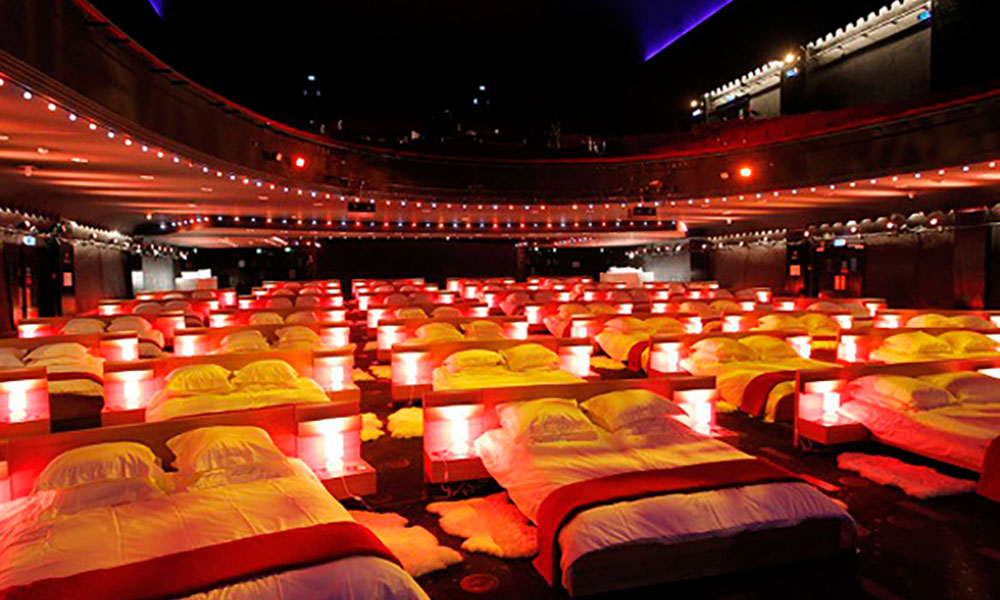 With 5-star offerings such as reclining seats and waiter services already prevalent across many Gulf cinemas, film fans in need of a little more luxury will soon have a new option to choose from.

Landing in multiplexes over the next couple of months, CineSnooze is a brand new technology that is being billed as “the ultimate movie theatre experience”.

Upon entering the CineSnooze fitted cinema screen, each guest will be taken to their own freshly made bed and given a warm mug of hot chocolate to help sooth them off to sleep. Earbuds and an eyemask will also be provided so the film doesn’t interrupt them throughout the entire experience.

“We found that so many of our customers choosing cushioned premium seats were falling asleep within minutes of sitting down, so thought we should cater to their unspoken demands, which in this case was for pocket sprung mattresses, 100 per cent Egyptian cotton sheets and Hungarian goose down pillows,” said Javier Ghent, regional manager at ArabCinePlex, which has been developing the technology.

But the real genius of CineSnooze comes into effect once the film has finished. Having been woken from their well-earned slumber, guests will sit down with a trained member of staff who will explain the film’s main story arc, central characters and plot themes, as well as providing details of essential quotes and scenes.

“We want to ensure that should a conversation regarding the film arise – whether it be about a lightweight Michael Bay actioner or a mind-boggling Jean-Luc Godard art house affair – all CineSnooze guests will be able to hold their own and offer a confident, well-considered critique,” added Ghent.

The first CineSnooze service is set to launch in Dubai next month, but tickets already on standby having sold out weeks ago. Cinemas in Abu Dhabi and Doha are now fitting dedicated CineSnooze rooms.

“I see this becoming the next big deal in the region’s cinema industry,” said entertainment journalist Barry McQuigley. “Judging by the responses so far, it seems that film fans across the Gulf are crying out for the chance to put their heads down and sleep soundly through the latest multi-million dollar summer blockbusters.”

But while CineSnooze may take the premium, top-tier cinema crown, those in the cheaper seats also have something to look forward to.

“We’re going to be trialling a new concept where audiences can choose to lower the volume of the film should it begin to interrupt their conversations,” said Ghent.

You may also like...
Related Topics:abu dhabi, dubai, uae